We see that the function zn passes through the system invariably. Due to the formula (1), the transfer function of the system is 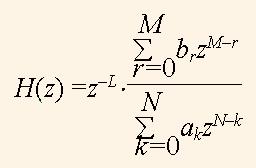 The numerator and denominator of the fraction (3) are polynomials with the positive powers of z, and a0 = 1. The multiplier z-L represents the delay to L cycles, and can be taken off. The roots of these polynomials are equal to q1,…,qM and r1,…,rN,, and are called as zeros and poles, respectively. The function H(z) can be represented by the sets of zeros and poles as the following fractions

where K is the transfer ratio or the amplification factor of the system.

Poles and zeros of the transfer function

Poles and zeros are usually represented in the complex plane as circles and crosses respectively. Fig.1 illustrates an example of pole and zero allocation of some low pass filter. A root point is equal to a couple of real and imaginary numbers: r = rR + jrI . It is convenient to represent it in the polar coordinates by the magnitude |r|, and phase ω: r = |r|e-jω. When we consider the discrete signal computing the phase ω represents some frequency of the transfer function. The pole magnitude is not higher than a one for real filters, i.e. |r| < 1 . The number of poles with the nonzero imaginary parts is always even.

The magnitude of the transfer function |H(z)| can be represented in the three dimensional space as the endless elastic diaphragm, which is pulled up the complex plane at the mark one. The diaphragm points, which represent zeros, are pulled down to the complex plane, and points, which represent poles, are pulled up to infinity. If we draw the concentric circles in the diaphragm, then after its stretching we derive the figure like in the Fig.2. The bold line at the surface |H(z)| (Fig. 2) is mapped to the complex plane as a circle with the radius of one. This line is derived by

When we input the sequence e-jω in the formula H(z), then we derive the discrete Fourier transform, and when we input it into formulas (2) or (3) we get the transfer function

This transfer function means the transfer ratio dependence on the input signal frequency ω. The function |H(ω)| is called the magnitude frequency response (MFR) of the system. We can imagine that the bold curve in the Fig.2 is depicted in the cylinder, which is rotated on the axis o|H(z)|. When we untwist this curve and map it in the plane we derive the diagram, which is formed by the unlimited periodical curve with the period of 2π, like the curve in the Fig. 3.

The frequency axis of the MFR is normed by dividing to 2π for the usability, so as a one in this axis represents the sampling frequency.

Similarly the phase frequency responce (PFR) of the system is derived:

It is adopted for the digital filters, that they have the level of MFR higher than √0,5 ≈ 0,7 in the pass band. This means that in the pass band the power of the filtered signal is no less than a half of the nominal power. The respective frequency bound is called as the cutoff frequency (ωc in Fig. 3). The maximum level of the filtered signal in the stop band is called the suppression level of the filter (Hs in Fig.3).
The DSP systems are usually the chains of sequentially connected units.
Therefore, it is useful to represent MFR with the logarithmical scale, i.e.

and other functions based on it. Function H1(z) represents the allpass filter. The poles and zeros of the function H1(z) are illustrated by Fig. 4. The poles and zeros of the function (8) have the equal angles ω. If length of the pole vector is equal to r, then the length of the zero vector is equal to 1/r. As a result, the zeros fully compensate the poles, and MFR is equal to 1 in the whole frequency band. For this property such a filter is called as an allpass one.

The allpass filter has not effect on the signal magnitude, but it distorts cardinally its phase. Moreover, when the factor b approaches to a one, then the phase distortion at the frequency ω is sharper. If we connect two allpass filters with the characteristics H1(z), H2(z) in parallel, i.e.

One can increase all the delays in k times in the linear DSP system. Then instead of the transfer function H(z) the function with multiple delays H(zk) is considered. For this feature such a filter is named as a multiple delay filter. The effect of delay multiplication consists in scaling MFR, and PFR diagrams in k times along the axis of frequencies.

Let the coefficient k is equal to 2, then in the diagram in the Fig. 3 the marks π, 2π and so on are exchanged to marks π/2, π etc. As a result, the number of both pass bands and stop bands is doubled.

Consider H3(z) is a low pass filter, and we construct the multiple delay filter H4(z) = H3(zk). Then its MFR |H4(ω)| has k pass bands. In this situation we can select a single working pass band using, so called, masking filter with the transfer function HM(z). Such a filter is connected to the multiple delay filter in sequence, i.e. the resulting transfer function is
H(z) = H4(z)*HM(z)      (11)

MFR of the masking filter has the stop bands in that frequencies where the pass bands in MFR |H4(ω)| are present, which we want to suppress.

In this article we consider the computation of the transfer functions using VHDL. For this purpose we have to use the mathematical packages IEEE.MATH_REAL, and IEEE.MATH_COMPLEX. In the last package the constants, types, and functions are defined, which operate with the complex data.

Below we consider a set of developed functions, which are useful to calculate the transfer function. The calculation of the sequence zn is implemented using the following functions, which overload each other.

The following function calculates H1(z) due to the formula (8), but for positive degrees of z , i.e. considering the equation(3). It is useful for the scanning of the space |H1(z)| when we search for zeros and poles. By this process we sequentially set different values of the magnitude mag, аnd phase fi of the complex vector z. It is used for computations of MFR and PFR as well.

The following function calculates the formula H1(z2) (8) for the negative degrees of z with a single magnitude, i.e. it calculates the function H1(ω), for ω = fi . Therefore, it is used only for computing MFR, and PFR.

To scan the three dimensional space |H1(z)| the following part of the VHDL program is used.

Let us investigate the function H1(z) using the VHDL program, which outputs the diagrams |H1(z)| for different values |z| to estimate the coordinates of poles and zeros of the function (7). Consider a = -0.5, b = 0.64. Then the transfer function is

The analysis of the diagram arg(H1(z)) shows that for the angles ph = 0 the phase is equal to 0, and for the gradual increase of ph the resulting phase is monotonously decreased. But when ph and norm of z approach to poles the phase sharply approaches to ±π.

To compute the function | H3(ω)| in the previous VHDL program one variable assignment operator is substituted to the following operator, which represents the formula (10) .

Now we can investigate the function H4(z).

The diagram |H4(ω)| (Fig.7,а) is built by the substitution of an operator to the following one as well as in the previous example.

We can see that the diagram in Fig.7,a represents the twofold repeated diagram in Fig 6, which is typical to the filters with multiple delays.
Тhe function of the masking filter

we can prove by the diagram |HM(ω)| (Fig.7,b), which is computed using the following operator.

Finally we can investigate the function (11), which is the composition of functions H4(z) and HM(z):

The diagram of resulting MFR |H(ω)| (Fig.7,c) is generated using the following operator.

As we can see in Fig.7, the function HМ(z) masks the function H4(z). As a result, we derive the transfer function H(z) of the low pass filter which cutoff frequency is equal to fc = 0,06 and suppression level is higher than 23 db.

Concluding the article we can see that the simple transfer function (12), which can be implemented only with additions, has rather high filtering properties. The FIR filter with the analogous characteristics has at least the order 60. The properties of this function were investigated by using only VHDL, not to consider Matlab or other popular DSP modeling tools.

Further data about allpass filters, masking and multiple delay filter one can find in the references below.